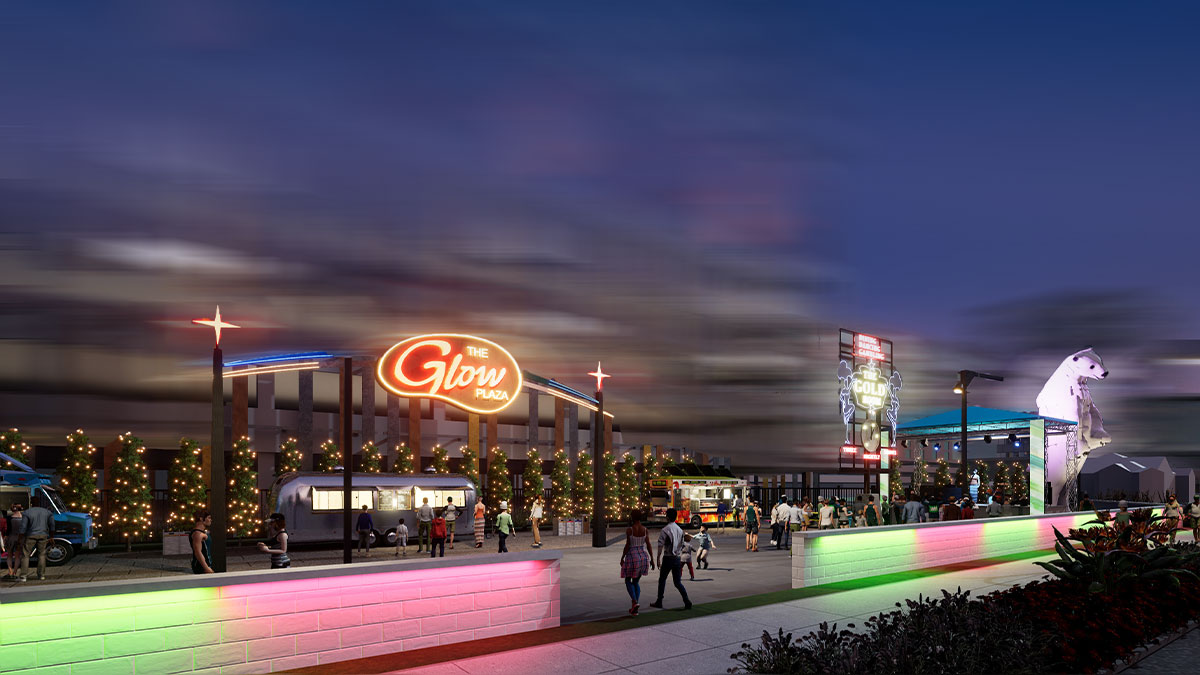 This summer, join us @theglowplaza every Friday & Saturday for our FREE outdoor concert series! We’ve booked a spectrum in varying styles of music, so there’s sure to be something for everyone! The fun starts with the 2022 series kickoff on July 8th and runs through September 3rd. Event times are 6-11 pm, while set times run 6:30-10:30 pm each night.

Drinks ✓ We’ve converted an Airstream International Travel Trailer into a Full-Service Bar – dubbed the “Tipsy Tin”, which will be serving your favorite libations all summer long.

Food ✓ At any given weekend, you’ll have your choice of three different food truck options, rotating on a weekly basis,  to provide your palette with ever-changing mouthwatering options. 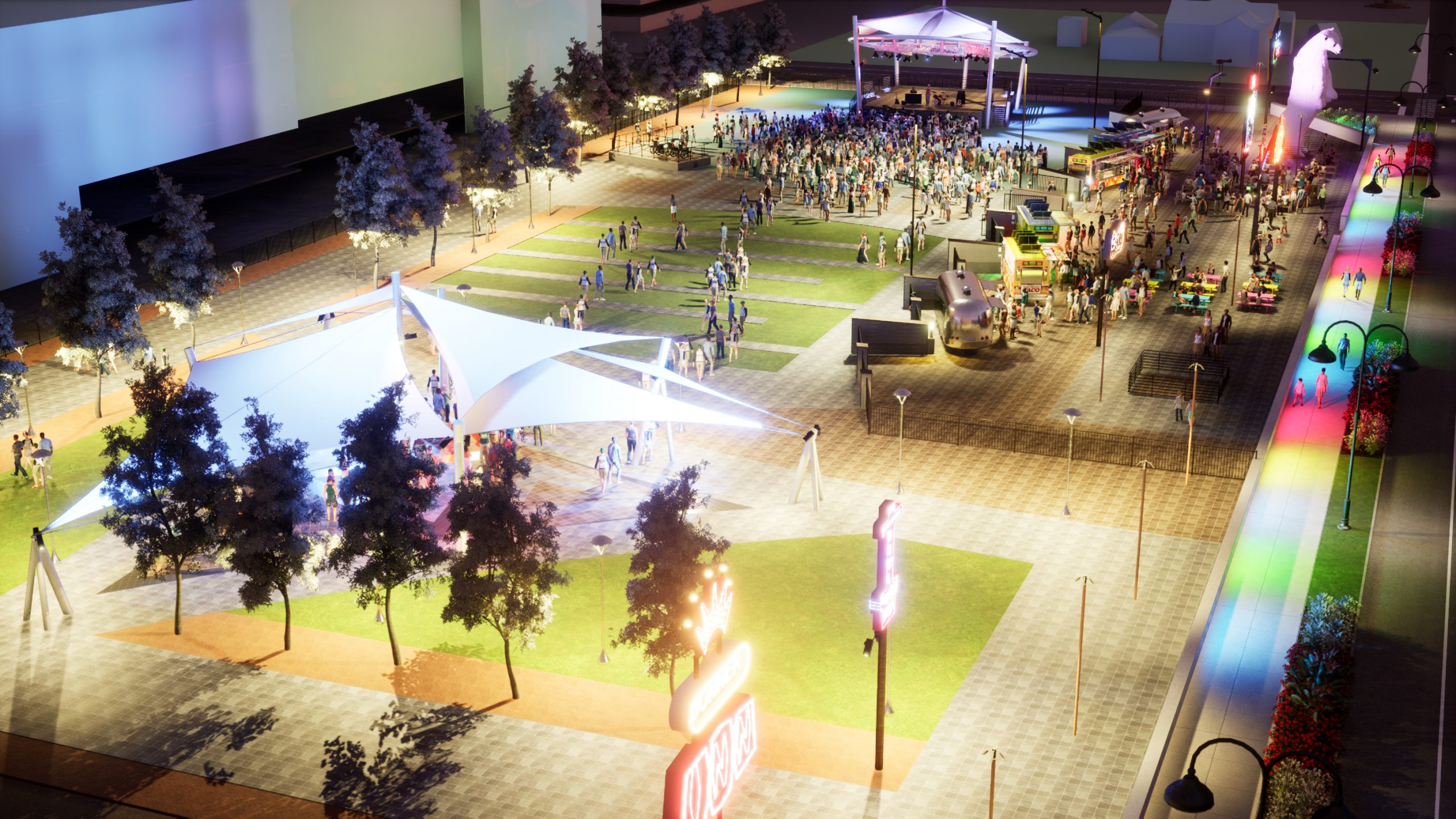 The Glow Plaza Festival Grounds will allow us to expand our vision of The Glow Plaza, creating a very special location for festivals and special events of up to 8,000 visitors.

For the re-imagined Glow Plaza Festival Grounds, there will be the addition of a state-of-the-art stage for free concerts, a large open-air shaded pavilion, and an expanded food truck alley. Plans for the space so far include several food and entertainment festivals as well as events tied to Burning Man, Hot August Nights, and Street Vibrations.

Construction is expected to conclude this fall.

Fronted by singer-songwriter-guitarist Jason King Roxas, the Jason King Band is a power-packed ensemble determined to make you move!

Hill Street has been playing classic rock favorites live in the North State for over 10 years. This is a dynamic four-piece cover group that loves the live rock genre.

New Wave Crave is the high-energy 80’s tribute band that’s more 80’s than 1980! Bring the generations together to sweat the dance floor!

Rising country recording artist, Jessie Leigh infuses her rock and roll attitude into her country style. One night only!

Get ready to rock out to some highly energetic hard rock, featuring the Greg Golden Band!

Wicked Wayz CC & the Glow Plaza are joining together to bring you “Wicked Wayz Cruise Nights” Everyone is invited! Bring the Family & Your rides out for a FREE night of family fun. The turn tables will be maintained by Reno local, Dadswax. This event will be held in the parking lot east of the Glow Plaza on the corner of 4th and Ralston.

Jake’s Garage, one of the Reno Tahoe area’s favorite rock bands plays the #1 hits from the last 40 years. Their powerful vocals and dueling guitar sounds offer an explosive and fun musical experience for everyone in attendance.

If you didn’t catch them on the first go-around the New Wave Crave will be returning for a special second performance on Saturday. Don’t miss out!

Not your average seen-it-before Beatles tribute band, with Beatles Flashback you’ll get a unique presentation of Beatles music like you have never seen or heard before.

Get ready for an encore performance from the Jason King Band taking the stage on Friday!

In the past few years, American Mile has been carving their name into the roots of rock music around North America. With influences ranging from Aerosmith and The Black Crowes to Chris Stapleton and Tom Petty their powerful sound has garnered them important shows in front of thousands at festivals and shows. Enjoy the show!

Get ready for a second dose of hard-hitting drums and wailing guitars, it’s the Greg Golden Band, doing what they do.

Live DJ, Dadswax will be spinning old-school hip-hop favorites, along with awesome low-rider cars, trucks, and bikes. This event will be held in the parking lot east of the Glow Plaza on the corner of 4th and Ralston.

Jake’s Garage is back on center stage to give you some more of their signature rock n roll sound!

Maxx Cabello Jr is an amazing guitarist, soulful vocalist, and prolific songwriter, who hails from the streets of the San Francisco Bay area where he is turning heads and bending the ears of the most jaded veteran musicians and music aficionados.

Back for the hat trick, the Jason King Band effortlessly creates music that is both vital and relevant, while staying true to their blues roots.

Offering a unique blend of sound combining, County, American, and Southern Rock, the Cripple Creek Band has a little something for everyone.